They should be able to regulate their body temperatures perfectly well within their tanks. That being said, it is always a good idea to keep an eye on the temperature of the tank in question. 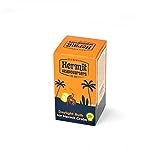 Do hermit crabs live in water?

Whether a hermit crab can live in water depends entirely on its species. As the name suggests, land hermit crabs live primarily out of the water. However, they do need access to water, too. They need the water to keep their gills and their shells wet throughout the day. They also tend to reproduce in the water and start their lives out in the water.

On the other hand, aquatic hermit crabs spend most of their lives in their water and rarely leave it. You can also find both saltwater and freshwater hermit crabs, so you will need to curate their tanks based on their specific environmental needs.

Hermit crabs can hibernate in a way. They do not burrow themselves away for entire seasons, unlike some animals. However, there are a few reasons why they do burrow.

First, hermit crabs will burrow if they are cold. If the temperature in their tank falls below 70 degrees Fahrenheit, then they will bury themselves in order to keep warm. That is not necessarily a good thing, which is why it is important for you to keep an eye on the temperature of the tank!

They also tend to burrow, even for weeks at a time, when they are molting. This is because when they molt, they are vulnerable. They use their shells to protect themselves from environmental changes and from predators. Without their shells, they are therefore vulnerable on multiple levels.

Therefore, in order to remain as safe as possible, they bury themselves, sometimes even up to eight weeks, at which point they then find another shell and resurface. However, if you find that your hermit crab is digging themselves in and out of holes regularly, it could also be that they are just looking for food, or having fun!

In some cases, yes, hermit crabs do pinch. Although hermits are known for being gentle animals, they do pinch in some cases. However, it should not be seen as a form of aggression. Hermit crabs will pinch if they feel threatened – it is a defense mechanism. It will happen if you try to carry them the wrong way, and is simply a natural instinct.

Moreover, however small your hermit crab may be, their pinch can definitely hurt! The pinching range for a hermit crab goes from about 30 newtons to about 1765 newtons. When you compare that to a human bite (which can reach about 340 newtons), you can see how a hermit crab’s pinch can be nothing more than a peck or incredibly painful!

It is therefore best to learn how to properly hold your hermit crab, and learn to approach it carefully. Once it gets to know you, and you it, you should be able to hold it, when necessary, without having to worry about it pinching you. That being said, hermit crabs are not cuddly animals and should only be held when necessary. Holding it too frequently could cause a lot of distress to your hermit crab.

One of the common fears that come with handling a hermit crab is whether they will bite you. However, in this case, there is nothing to worry about. Hermit crabs will not bite you for the simple reason that they can’t! Hermit crabs do not have teeth. Instead, they use their various pinchers and legs to tear up their food before it reaches their mouths. So, since there are no teeth, there is no biting!

However, that does not mean that a hermit crab cannot hurt you. As previously mentioned, some species of hermit crabs have very strong pinchers, and they will pinch you to defend themselves. In this case, you could say that their pinch is much worse than their bite!

Will hermit crabs die in the cold?

Hermit crabs can indeed die in the cold, but it would have to be very cold in order for that to happen. Hermit crabs can die in temperatures below 50 degrees Fahrenheit; however, that is not usually a risk for many tanks!

That being said, they do not do well in the cold. Being in tanks below 70 degrees Fahrenheit can affect the crabs in the long run. They will inevitably hibernate until they deem it safe to come out, which, if you do not pay attention to the temperature of the tank, could take a long time.