Can a Fish Tank Hang Over Stand?

A fish tank should not hang over a stand because it will put stress on the joints and seals in the tank. Fish tanks and the stands that hold them are more complicated than they appear. Between different materials, weight limits, and sizes, it can be difficult to find the perfect stand to match your new aquarium.

Because of this, many tank owners want to know if having the tank hang over the stand just a bit is okay.

Unfortunately, your fish tank should never hang over the stand, even a little bit. Fish tanks can be glass or acrylic, and while glass tanks are understandably heavier than acrylic tanks, the real weight issues occur when you add water.

Water weighs 8.34 pounds per gallon, so even a small 10-gallon tank will weigh over 80 pounds when full, without even considering the weight of the tank itself. All the weight puts a huge amount of stress on the base and joints of the tank. In most tanks, the panels are held together by silicone, so when there is an overhang, all that weight is being held up only by the silicone on the overhang, and gravity will eventually take its toll. 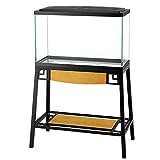 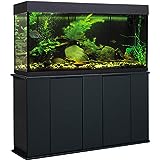 Will a Dresser Hold a 55 Gallon Fish Tank?

It can be tempting to use a piece of furniture that you already own, like a dresser, as a tank stand, but there are plenty of reasons this is a bad idea. A dresser can’t hold a 55-gallon fish tank for a long period of time because, when full, the tank will have over 458 pounds of water inside it, not even counting the weight of the tank and decor. Tank stands are purpose-built to support these tremendous weights and distribute them evenly.

Even the sturdiest dresser will struggle under the weight of a full 55-gallon tank, eventually. Dressers simply aren’t built to hold fish tanks. Instead, they’re built to accommodate drawers full of clothes. The structure of the dresser is not meant to hold the weight of an aquarium, and even if it can, how the dresser is constructed will cause it to eventually fail.

Fish tank stands, on the other hand, are built specifically to accommodate full fish tanks. They might appear to be constructed similarly to a dresser, but the joints and structure of a fish tank stand will not only hold a full 55-gallon tank, but it will also distribute the weight evenly, so no certain part of the tank stand becomes weaker over time before the rest of the stand.

IKEA is great for normal furniture and can be an affordable, easy-to-transport option for any household. That being said, IKEA does not produce fish tank stands, and there is more going on with a well-built fish tank stand than meets the eye.

Aquarium stands have to hold and spread the enormous weight of full fish tanks out evenly, so the structure of the stand doesn’t fail in one certain place. They are also usually water-resistant or at least treated with a water-resistant coating, so the occasional splash isn’t anything to worry about.

To put it simply, the only piece of furniture that we should depend on to hold our fish tanks are the pieces that are specifically built for fish tanks. Aquariums come with a lot of complications that run-of-the-mill furniture just isn’t equipped to handle.

How Tall Should a Fish Tank Stand Be?

While there isn’t a reason a fish tank can’t be built taller or shorter than average, for the most part, fish tank stands are built, so we can view the tank from a sitting position. On average, a fish tank will be between 30 and 36 inches (76.2 and 91.44 cm) tall.

There are specialty tank stands that can be shorter or taller, but most tank stands are built within the 30-36 inch range, so the tank can be easily viewed while seated. Aquariums are a source of entertainment and relaxation for many tank owners, and having to stand the entire time you view the tank would quickly become annoying.

If you want your tank to be more of a decorative piece instead of something to be watched while relaxing, consider a custom-built stand or making one yourself to find the perfect height.

Having a standard size for tank height also makes it easier for potential tank owners to decide where to place their tank and stand. There is a trend for all-in-one aquarium setups to be closer to the 36-inch mark, so the stands have room to accommodate all the hardware that comes with a tank.

Can a TV Stand Hold a Fish Tank?

TV stands can hold smaller tanks 10-gallons and under, but anything larger than that should be placed on a dedicated tank stand. TVs themselves have been getting lighter as they become more technologically advanced, and this means TV stands aren’t made to be as sturdy or able to hold as much weight.

This isn’t necessarily a bad thing if your TV stand is holding an actual TV, because it means the stand will be easier to move and usually cost less, but this is a tremendous disadvantage for a TV stand turned fish tank stand.

These TV stands also tend to be lower to the ground than traditional fish tank stands, making them more vulnerable to things like pets and accidental bumps. There also isn’t room for things like canister filters in a TV stand, or anyplace to hide the numerous wires that are part of a regular aquarium setup.

If you are determined to use a TV stand as a tank stand, make sure to only trust it with a smaller tank, 10-gallons or less. Larger, heavier tanks could cause the TV stand to buckle under the weight of the aquarium, especially when it’s filled. Even a 10-gallon aquarium will be over 80 pounds when filled with water, and most TVs weigh quite a bit less than that.